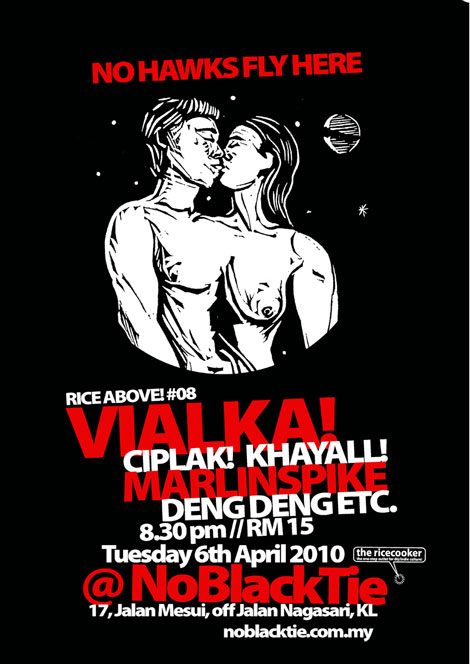 Brought to you by The Ricecooker Shop + No Black Tie

We return to No Black Tie, the venue which had hosted so many of our old UNCLOGGED series of shows many years ago. This is gonna be the first time RICE ABOVE! is gonna be happening at this most “posh” but still welcoming jazz/blues bar & diner, and there will be another on May 11th for the next episode.

OK. What are having on the menu? A mixture of excellent spices as per usual. There on top of the bill is renown duo VIALKA!, with locals MARLINSPIKE (making a return to the stage after nearly two decades in limbo!), KHAYALL (a new unit that’s too good to be true!), CIPLAK (a cross-dressing, noise-rock trio that’s doesn’t care!) and DENG DENG ETC. (total rocknroll madness!).

VIALKA!
“Globetrotting mavericks and dynamic two piece from everywhere and nowhere, Vialka unfailingly blow the minds of the uninitiated! With the world’s smallest and hardest hitting female drummer and ungodliest (un)bearded baritone guitarist, this band surpasses all expectation of the possibilities of popular music!”

MARLINSPIKE
Back in the early to mid-90s, the local scene had quite an excellent roster of bands & duos playing heavy, sludgy industrial rock which was informed by labels like Earache & Peaceville and bands such as GODFLESH, PITCHSHIFTER etc. MARLINSPIKE was at the forefront of this brief movement and now they are back!!

KHAYALL
They played for the first time at RICE ABOVE! #02 with Japan’s monsters BIRUSHANAH and stole everyone’s heart, especially those who love their rock heavy-arsed and their rhythm sloth-like! This will be the first time the band plays a full set!

CIPLAK
three guys with bass, guitar and drums; and you’d think it’d be a typical rock trio right? then they would turn up head to toe garbed in Puteri Umno baju kurung and tudung! or as crazed firemen in towels.

DENG DENG ETC.
Totally unsung rockin’ bad-boy chinese rawk trio! These guys didn’t listen to THE CARPENTERS when they grew up, they cocked their ears to nothing but anti-social music!! Not a good model for young people everywhere. They slouch too much.

BTW: The Ricecooker Shop will be selling the gig’s limited edition t-shirts and also the NEW ALBUM BY NEPAL’s RAI KO RIS!! Yay!