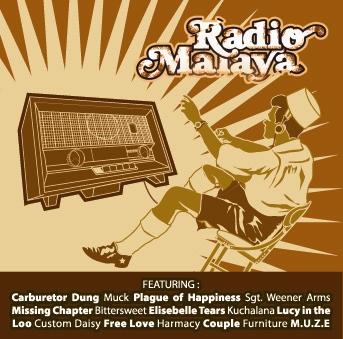 There’s a huge delay in the release date, but here’s a write-up by Daryl Goh in The Star in November 2005 about it:

Indie pop favourite Couple, punk mainstays Carburetor Dung, experimental outfit Furniture and a rare track from the now defunct Sgt Weener Arms on the same compilation? Only one label is capable of blurring the lines and pulling off such a feat, and to think it doesn‚Äôt even operate in the Klang Valley.¬†

The Ipoh-based Bodysurf Music, a DIY label running for 12 years now, can lay claim to the year‚Äôs finest collection of homegrown acts, the upcoming Radio Malaya compilation, due to hit the streets in late November.

‚ÄúWe‚Äôre very excited about the Radio Malaya compilation. It is Bodysurf‚Äôs extension of the Kopi Sechewen series (a compilation of Ipoh-centric bands) and as a scene sampler, Radio Malaya goes into the non-mainstream for music ranging from indie-pop and punk while also retrieving gems from those cool homemade EPs out there,” said Meor, Bodysurf Music pioneer and Radio Malaya producer.¬†

The project is nearly complete and distribution is being finalised. Meor reveals a track-list of 15 local bands, of various music styles, to capture a thriving independent circuit that can hold its own against the crass commercialism of the day.

The fact that most of the DIY music hotbeds across the nation have been represented reflects the credibility and respect that Bodysurf holds in the scene.

Meor, who also drums for Muck, noted: ‚ÄúIt‚Äôs tricky to piece together such compilations, sometimes you have to leave out bands and that‚Äôs never easy. But I think Radio Malaya is the sort of indie collection to leave a smile on your face for weeks.”